Here’s a sneak peak of the new HealthEngine TVC campaign that launches on Sunday night during the X Factor.

The campaign, called “The Waiting Room”, is a clever spin on the traditional medical waiting room. It opens with a patient entering the waiting room with his HealthEngine App open on his iphone.

HealthEngine’s CEO Dr. Marcus Tan even makes a cameo appearance – can you spot him?

The campaign was written and produced by The Brand Agency and directed by award winning Dave Wood from Sydney.

Below are some action shots with Dave directing. 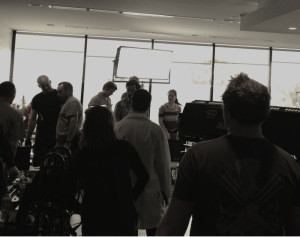 The million dollar campaign will appear on the Seven Network and be rolled out digitally across the Telstra network.